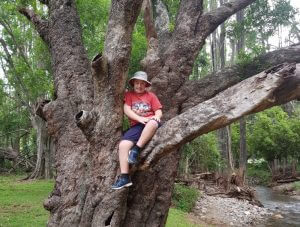 With support from the National Disability Insurance Scheme (NDIS), 16 year old Josiah is building his communication skills and his physical capacity.

Josiah, who has Down syndrome, has been attending regular speech therapy sessions for the past year.

“We had a number of goals for Josiah, but we started by focusing on his speech and improving his physical strength and co-ordination,” said Josiah’s mum Kerry.

“Before receiving NDIS funding, we had to give up speech therapy for Joe, as we just couldn’t afford it anymore. We did continue to work on it at home, and did the best we could, but it wasn’t the same as having regular sessions for him.”

“Since he has been going to regular therapy, we have noticed significant improvements in his speech.”

Josiah is also working on developing his physical strength and getting active.

“Having hip dysplasia, Joe’s gait was very loose, which was causing other problems,” said Kerry.

“He now has regular checks with the physio and podiatrist, which is all covered by the NDIS and is included in his plan. He follows an exercise program which was put together by his physio and works out twice a week with his support worker.”

“He also does a range of activities like basketball and scootering, and because his core strength and balance has improved so much, he can now ride a push bike on his own, with no training wheels either! This is a major achievement.”

With support workers funded through the NDIS, Josiah is getting out and meeting people and participating in his community.

“He wants to be out in the community and he wants to be doing things. That was the other facet of our goals for Joe, for him to be accessing community, to be learning what is socially appropriate and what’s not, and to do activities with other kids.”

“A carer takes him to Scouts once a week and he loves it. He had never done Scouts beforehand, but now goes to Mt Tamborine Scout group, which is well worth the travel. He is in a safe place and the kids are very accepting of him and he just loves it.”

Kerry said it was her GP who encouraged her to seek support through the NDIS.

“My GP encouraged me to apply. In the past we hadn’t been eligible for very many things, so I wasn’t sure what to expect.”

“The day that I sat in the office and the LAC (Local Area Coordinator) told me that we had been approved and this was the plan and this was the scope of it, I just couldn’t believe it. I burst into tears and felt like I had won the lotto. It was amazing.”

Kerry is very happy with the support she receives on her NDIS journey.

Carers Queensland is the NDIS Local Area Coordination Partner in the Community for the Gold Coast and can support you to find out more about the NDIS, to apply for funding and to help you get started with the NDIS.

To find out more about how the NDIS and Local Area Coordination program can work for you, contact Carers Queensland NDIS Local Area Coordinator Partner in the Community Program for the Gold Coast region on 5671 7600 or 1300 999 636, or cq.enquiries@ndis.gov.au