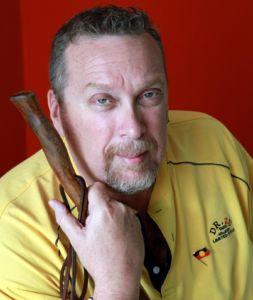 His art is tied to a greater awareness of his life story. A story that he tells with every stroke of his brush.

But the story that artist Paul Calcott is telling today is one of belonging, community and reconciliation.

For Uncle Paul there is no difficulty in approaching this subject in art. That was the main reason why Carers Queensland asked him to depict its story.

“I have a long relationship with Carers Queensland. I’ve ran art groups for them in the past and I’ve come along and done some talks at their Maroochydore office,” he says.

“As a person with disability myself and Aboriginal man, it’s a huge honour to be approached to do this. It’s also a big responsibility to do it properly and respectfully.”

“The artwork I’ve developed depicts their story and what they do, using a traditional style of art.”

“It’s a fairly big piece. It’s quite a story, translating Carers Queensland, how it all started, the work they do in the community, through storytelling.”

The theme of Uncle Paul’s paintings can be part of what we call narrative art, and interpreted as abstract as it uses symbols, colours and shapes to achieve its purpose.

His cultural influence reaches far beyond imagination.He weaves his magic into his paintings extending people’s understanding of his traditions.

“I try to be respectful to the organisation but also to my culture.”

“What I do is take the symbols that have been used for thousands of years to create a story.”

“This story depicts Carers Queensland as an organisation, their journey, their connection to community and the work they do with carers, people with disability and their families.”

“There are symbols representing different parts of community and after I’ve put them all together, these show their pathway, where they are and where they are headed to.”

“It’s an artwork that showcases what they’re doing already and I hope it can help them develop relationships and encourage their own people to say ‘let’s keep up with this now and let’s live up to the artwork.”

The artwork will be unveiled in the coming months and depicts Carers Queensland’s offices across the State, the connections to different parts of community, and how the diverse groups in community connect to the organisation.

“I hope my work also encourages the organisation to connect even more with community and to continue to provide diverse types of support services.”

To Uncle Paul, art not only enables change, it can also speak for itself and we can engage with it on so many different levels. The whole idea of becoming an artist was an important transition for him as it counts as free expression.

“I’ve been doing this officially, for about 10 years now.”

“I think it’s great that organisations have started looking at that and engaging with communities, developing proper relationships with our community, that’s how culturally our models of support work, we’re not a diagnosed-based culture.”

“We’re not that all interested in how you got to disability, it’s what you need now to be involved in community and have a good life and be part of your culture. “

“I would love to see more of that.”

Uncle Paul’s execution of technique has reached many people and places around the world including the Australian Embassy in Switzerland and the Canadian Government.

“Our art is a very unique style and tradition throughout the world and we don’t take it lightly.”

“I think that’s been the process with Carers Queensland too: making the effort to connect with communities and gain knowledge around First Nations’ culture. They are very diverse organisation
and I feel they really are making a difference.”

“This is a great opportunity for them to strengthen their link to communities and the people they support.”