Home/Posts/NDIS, News/‘Disability in our community is many things’ – the life and stories of Uncle Willie Prince 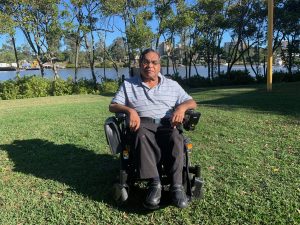 Uncle Willie Prince was born on the Aboriginal mission of Cherbourg on Waka Waka country in 1960.

“It was a time when the government of the day looked after and administered the life of Aboriginal people living on missions,” said Willie.

“There was an issue with my health. I was in and out of hospital on a few occasions, 16 times in fact before my first birthday.”

Not long after, Willie’s repeated hospital visits came to the attention of the State Medical Doctor and the Chief Protector of the Aborigines, who made the decision to remove Willie from community.

At age two, Willie was taken from his family and placed at the Brisbane Children’s Hospital in Herston for ongoing treatment.

“Without my family being present, these two men decided my future and with a stroke of their pen, my life changed, and I was now the property of the government of the day,” said Willie.

Following a diagnosis of cerebral palsy, it was decided that Willie should be put up for adoption, rather than returning to his community in Cherbourg.

“After the hospital, I was still in the hands of the government, and they didn’t want me to go back to Cherbourg or anything like that, so they tried to adopt me out,” Willie said.

“Years later, I managed to obtain a medical file, which had information about me from the moment I was taken from Cherbourg. I found out that my mother never signed release papers. If she had signed the papers, I would have been on the open market for adoption.”

After attempts to adopt Willie out were unsuccessful, he was transferred into the care of the nuns at the Xavier Home for Crippled Children in Coorparoo.

“The home at the time was a mix of children with disabilities and children who were not able to fit into society. My life was controlled by the nuns who ran this home.

During my early years there, I was the only Aboriginal child in the home,” Willie said.

After spending his youth in various hospitals and institutions across Brisbane, Willie founded the Aboriginal and Torres Strait Islander Disability Network of Queensland, to help ensure a fair go for Aboriginal Australians with disability.

Today, Willie hopes his story can serve as a reminder of the past and help to influence policy and decision making of the future.

“The network was founded by three people. We all had three things in common. That was being institutionalised, being Aboriginal and having a disability,” he said.

“There was really no platform for people like us to speak and to be listened to. I got involved in the disability movement because of what happened to me as a child and during the time I grew up in an institution, being looked after by the government of the day, being removed from family and culture.”

Willie applied for support through the National Disability Insurance Scheme when it rolled out in Brisbane in 2018.

He says it has allowed him to maintain his independence and to pursue his passions.

“Before the NDIS, the only support I had was through friends and family. I was mostly living independently in my own place, going about my business and it didn’t really occur to me, you know, that I needed help, because I was so used to being independent.

“As I grew older, my disability started to deteriorate a bit. When the NDIS came about, it gave me the opportunity to see whether the NDIS was for me and how it could help me in my everyday living and employment situation.

“I was still at work when I got the NDIS, and that helped me greatly. Instead of relying on work colleagues to do this and do that, it gave me the opportunity to do some of my passions that I had been so long thinking about like ten pin bowling.”

Willie said the NDIS was a good opportunity for Aboriginal people with disabilities to get access to the support they need, and that disability was often a misunderstood topic in the community.

“Disability in our community is many things. It is very, very hard when you are trying to educate people about the issues that we face, because we have many.”