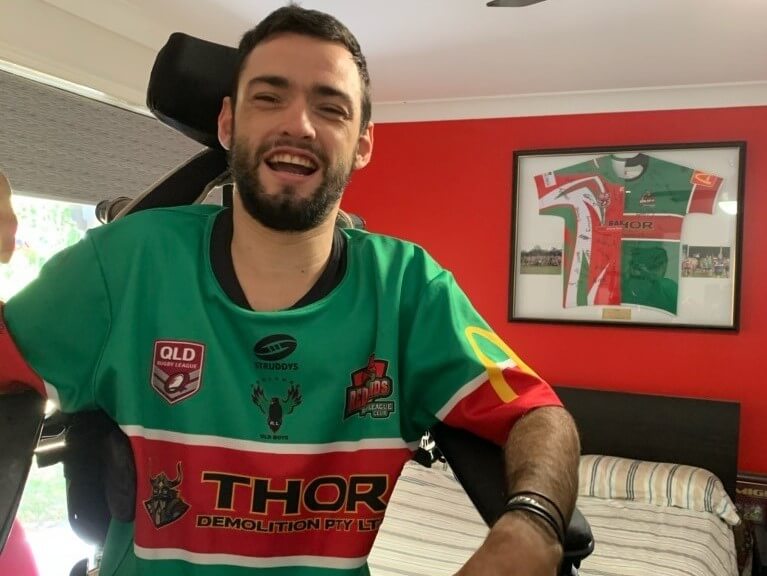 For Josh Pople work and footy rules his life, with the 27-year-old utilising his National Disability Insurance Scheme (NDIS) supports to achieve at both.

Josh has been involved with his rugby league team, the Redlands Parrots, for the past seven years — and the Capalaba Warriors for five years previously — becoming a LeagueSafe officer and a valuable team member.

Josh, who has cerebral palsy and uses an electric wheelchair, attends footy training sessions during the week and weekend matches with his support worker.

Mum, Lisa, said while Josh loves the game and would often play with his mates when he was at school, being able to contribute in other ways is the next best thing.

“On Tuesday and Thursday evenings Josh’s support worker takes him to football training where Josh does the water during training and is on the field with the players and the coach. Also every weekend he goes with Josh to the footy matches and any other social things such as a gathering or BBQ or drinks with the footy boys,” Lisa said.

“On game day, Josh does his spiel to get the boys motivated. The boys love him, as he has been with the guys for many years.”

When Josh isn’t at footy, he works at a local printing company two days a week for the past year.

“Josh has a support worker go with him to work. Without the NDIS he wouldn’t be able to go.”

Josh is also passionate about inclusion in sports and working out ways for children to be more involved, using his own story about how he got started in sport.

“Josh has done the theory side of coaching through Queensland Rugby League years ago, and also has taken the opportunity with Sporting Wheelies and Sport Connect as a spokesperson, so even though he can’t play, there are other avenues.

“During that time, Josh also advocated for a school student who wanted to play touch football, so he spoke at the school and talked about ways to modify the field size, and he came up with the idea to use a pool noodle to attach to the back of her chair to touch so she could play.”

Josh is also considering studying for a Certificate IV in Sports and Recreation at TAFE in the future, as he dreams of having a career in the sporting field.

Josh received assistance to apply for and implement his NDIS funding from Carers Queensland’s NDIS Local Area Coordination Partner in the Community Program for the Brisbane region.

“When Josh got the NDIS it changed his life. He went from a young man only accessing the community twice a week for four hours, or needing family to take him to things. Now he can do whatever he wants.”