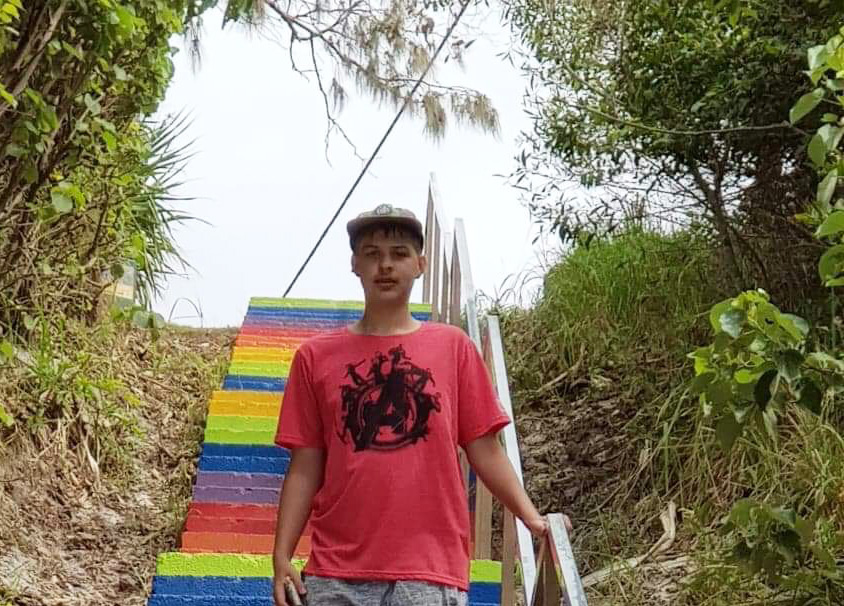 Fifteen-year-old Jack Saunders is a movie buff and beach lover, and after climbing the Rainbow Beach stairs for the first time, he is 64 steps closer to achieving his goals using funding from the National Disability Insurance Scheme (NDIS).

“Jack had wanted to go to the beach for ages,” explained his Mum, Debbie.

“We usually need to take his wheelchair with us because he gets fatigued – he says his legs ‘faint’.

“I was amazed and Jack was rapt to then tell his physio what he’d done.”

Jack has cerebral palsy and Glut1 Deficiency Syndrome (Glut1-DS), a rare genetic condition where glucose isn’t transported properly into the brain, leaving the brain starving for energy to grow and function.

Building strength and improving mobility is one of Jack’s goals, along with building his independence and connecting with his community.

“He’s about to turn 16 and it’s something we were concerned about, to create that independence for him,” explained Debbie.

“The NDIS is helping him to develop more independence from us and building his confidence and maturity.

“He and his support worker have developed quite a rapport and it’s helping him to mature. I notice little things like Jack knowing he has to get ready or he has to have his wallet with him when he goes out. On one of his first outings with his support worker, Jack got himself a haircut and paid for it using his flexi card – first time ever without his Dad or I.”

Jack’s first year of NDIS funding will enable the family to make bathroom modifications that mean he can increase his independence at home.

“That will be a massive assistance for Jack. There’s no room in the toilet for assistance at the moment so we are looking for a bidet function and shower modifications to help him to be more independent and respect his privacy.”

“Due to Jack’s seizures which are part of his Glut1-DS, he should not be left in the bath alone but he is not able to stand for long enough in the shower either. With the modifications, the bath will be removed and the shower will have a bench seat, grab bars and shower rose that will allow Jack pretty much total independence with daily hygiene.”

The improvement in Jack’s life and future options is not by chance. The family had received limited funding in the past and so Debbie, who was looking forward to the NDIS rollout in their area, made sure she was prepared.

“I attended a few courses and workshops to prepare. I also did a couple of one-on-one sessions and it was all really helpful to work out what information I was going to need.”

Debbie recalls that when Jack’s Local Area Coordinator from Carers Queensland, Kylie, contacted them about Jack’s approved plan they were gobsmacked.

“We were thrilled to bits. Kylie was really thrilled for us. I’m still coming to grips with the support that it is providing for Jack that we couldn’t afford to or weren’t able to previously.

“What I would say to people who need support and haven’t looked into the NDIS is get onto Carers Queensland or the National Disability Insurance Agency because it can be such a great assistance. I really do believe it can be life changing.”

If you would like to find out more about the NDIS or attend a local information session, contact NDIS Local Area Coordination Partner in the Community Carers Queensland Gympie office on 0429 549 707 or email GympieLAC@carersqld.com.au.