Keegan's new-found confidence helps him engage and socialise in community 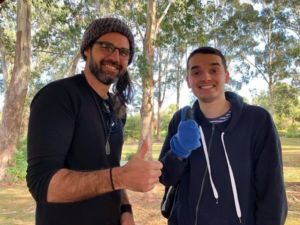 Aspiring film director Keegan is using his new-found confidence to produce promotional videos for local community groups and businesses, and to volunteer as a DJ and teach dance routines.

The 24-year-old, from Mt Tamborine, who is on the autism spectrum, and is using his National Disability Insurance Scheme (NDIS) funding to access support workers who are empowering him to pursue his love of film and television and to run his own YouTube channel.

Keegan’s mother, Leisa, said before being connected with support workers, Silvan and Ryan, her son shied away from social gatherings and would refuse to try anything new, answering with a solid ‘no’ when someone suggested it.

But thanks to NDIS supports, he’s now an active member of the social inclusion group Mountain Mates, where he runs DJ sessions during social events and teaches group dance routines.

Keegan is also fully immersed in the world of multi-media, with support worker Ryan teaching him how to film, use editing software and run his own YouTube channel.

“When I met Keegan, it was his goal to become a director. He has had a lifelong interest in film and television and has an incredible memory when it comes to facts associated with TV shows and directors and awards,” Ryan said.

“Keegan immediately began to demonstrate an incredible ability to learn new things and retain information when it was a topic he was interested in.

“Within the framework of filming and directing, Keegan has progressed in reaching his personal goals such as community engagement, social skills and having the tools to express and share his creativity and passion.”

Before receiving supports, Ryan said Keegan was shy and would not engage with anyone. Now he introduces himself as Keegan Jones, “the host of the Keegan Jones Show”.

Connection with community has also been a major facet of Keegan’s development and he’s been supported to complete video projects for Landcare, The Men’s Shed and Mountain Mates. He’s even helped film a talk given by local Aboriginal Elder, Aunty Ruby.

The budding director was also given the chance to film the behind-the-scenes for a professional film production called ‘Sunshine’ – an inclusive film project, which opened the door for him to study filmmaking.

Keegan is also involved in Bus Stop Films, an inclusive training provider, making films with, for and about people from diverse backgrounds and disabilities. 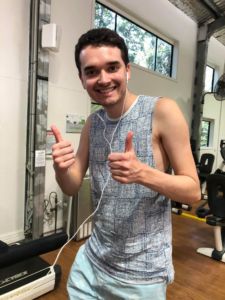 “His transformation has been quite a beautiful thing to reflect on,” Ryan said.

“My message to anyone who has yet to embark on the NDIS journey is when the support is there, anything is possible, and it’s one of the strengths of the NDIS – the ability to match a support with a participant.”

Keegan said the best part of being supported by the NDIS is having a support worker who helps him to make videos, do camera work, edit and more.

“We do green screen videos; we use different cameras, lenses and different backgrounds. We edit videos; we make new projects, and we make behind-the-scenes videos as well,” Keegan said.

Leisa said the positive impacts Keegan’s support workers have had on her family were “almost immeasurable” and her son’s new-found confidence has made him happier within himself.

“We have always just wanted what is best for Keegan. Now we know every day they work with him they are engaging him in meaningful and purposeful activities,” she said.

“We are so grateful to the NDIS for the support given to Keegan through us being able to engage these incredible support workers for him. Every day he has a purpose,” Leisa said.

“Our family life is happy, and we know he is living an amazing, meaningful and purposeful life.”

If you’d like to find out more about the NDIS, Carers Queensland can support you to learn about the scheme, apply for funding and to help you get started.

For people with disability who are not eligible for the NDIS, Carers Queensland can help to identify and link you to options for support in your community.