Max’s dreams are coming true with the NDIS 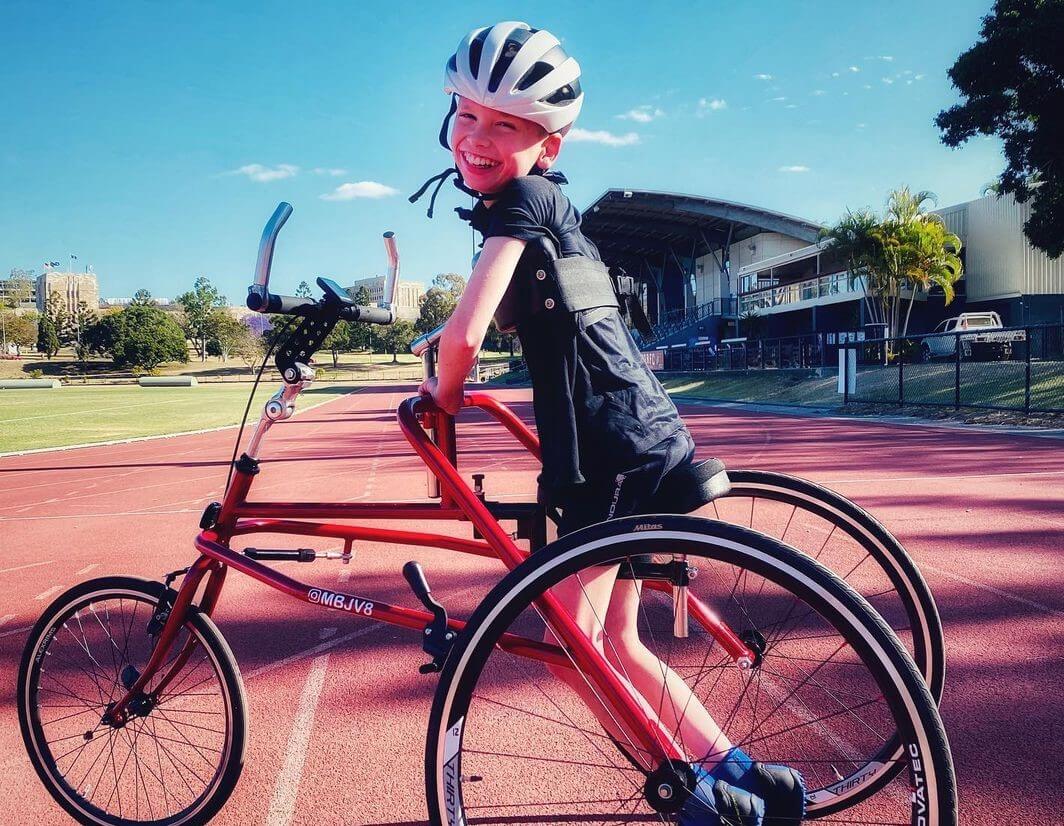 For Max Bailey-Jensen, being able to communicate using the latest assistive technologies and competitively compete in RaceRunning is a dream come true, made possible with the National Disability Insurance Scheme (NDIS).

The Brisbane 12-year-old, who has cerebral palsy, accesses a NeuroNode – a wearable electromyography control device – which allows Max complete computer access by wearing a small switch device on his ankle.

Max’s mum, Samantha, said as Max has no independent hand function, access to this technology has been a game changer for him in communication and independence.

“Last year at high school, Max completed Digital Design using Adobe Photoshop and Illustrator all by himself, designing, cropping and drawing; I was blown away with how proficient he was on it so quickly,” she said.

Like most boys Max also likes to game, and uses a Tecla Shield and head switches to access his iPad for gaming, Chrome casting YouTube to his TV independently and composes music on Garage Band.

“An Xbox Adaptive Controller combined with the Logitech Adaptative Gaming Kit allows Max to independently game by easily plugging in switches to the adaptive controller using the same keys as a standard controller,” she said.

“Max is using up to four switches with his head and knees to independently drive in Forza; other times he uses a single head switch to shoot whilst his friends navigate the controller for direction.

“This setup is one of the cheapest and user-friendly pieces of assistive technology we have come across, and allows Max to not only game like his friends, but also be able to participate in gaming conversations as he is actively playing and not just watching from the sidelines.”

Over the years, Max has stayed active by taking part in numerous sports, including a triathlon and weekly CrossFit and Judo training, to help improve his core strength and neck control.

But it was after seeing the sport of RaceRunning, in Denmark, where Max was born, he became hooked.

“When the bikes started to be imported into Australia we applied for the NDIS and Max was granted the first frame in Australia,” she said.

“The RaceRunner allows him to participate in sports days, going running with mates and be physically activate as he loves to move.

“RaceRunning is going to make its debut in the Paris 2024 Paralympics, so who knows, maybe Max will be on the track running for Australia.”

Max has also joined the PARASTART RaceRunning program for people with high needs cerebral palsy with the University of Queensland.

“Max was the first person in Australia to receive a national classification in the sport,” she said.

“Max is now training up to five days a week RaceRunning, swimming, and he’s in the weights room developing his physical skills and abilities.

“The benefits we are seeing from a physical, mental and emotional level are really positive, and it’s great to see Max so empowered and fitter.

“With the support of the NDIS, we are able to send Max to training with support workers, which is helping to create independence and providing him the opportunity to make more individual choices for his life.”

Max is now onto his second plan after he received assistance to apply for and implement his NDIS funding from Carers Queensland’s NDIS Local Area Coordination Partner in the Community Program for the Brisbane region.

“The NDIS has been an absolute game changer for both Max and our family,” Samantha said.

“Max’s first plan was very equipment-focused; it was incredible when he got his first power chair at 11 and to see him have independence in his mobility.

“When the NDIS approved his assisted speech technology equipment in just three weeks so he could start high school with a voice; that was another great day.”