Home/Posts/NDIS, News/NDIS meeting Kelvin’s needs now and into the future

NDIS meeting Kelvin’s needs now and into the future 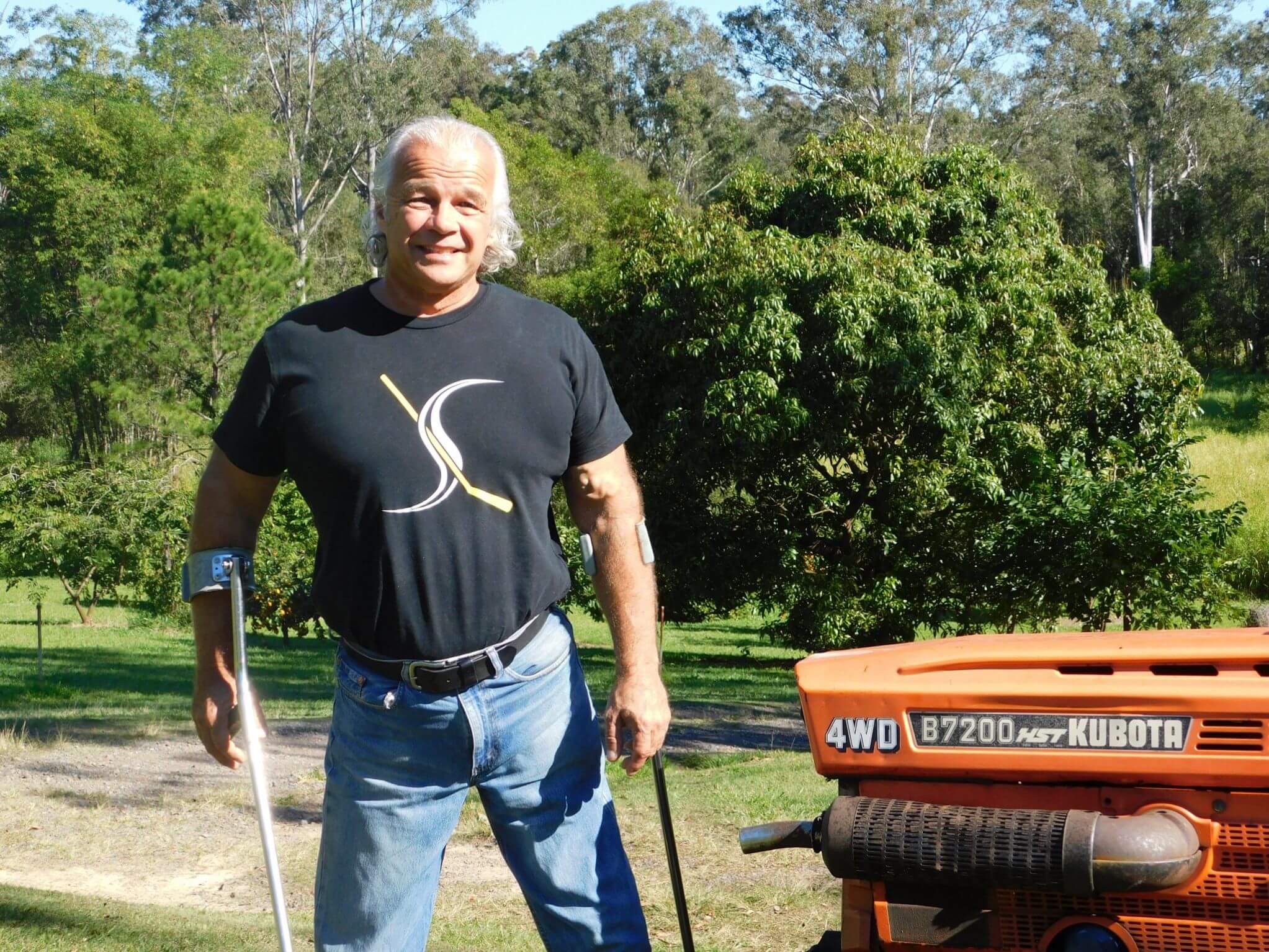 Talking with Kelvin Mickelson, it quickly becomes apparent that his calm and laid back manner hides an infectious enthusiasm to make things happen.

Kelvin, a Canadian-born Australian, has set world records in swimming, competed in volleyball with the 2000 Australian Paralympic training squad and, two years ago, set up Queensland’s first para ice hockey team. With his wife, Melissa, he runs a custard apple farm in Glass House Mountains.

For Kelvin, life has been a very interesting journey.

“I am a survivor of thalidomide back in 1962, and feel I was one of the fortunate ones in that I was born without legs,” Kelvin said.

“I am not going to dwell on the thalidomide atrocity as there is much publicly available, except to say that in places where thalidomide was administered, many of those places today have leading quality systems which provide protection and safety for the benefits of everyone.”

“I grew up on a farm in Canada – open space is in the blood. There were no support services near me, be it medical or adapted devices, in fact, everything was trial and error. For example, when I was a little boy, I still had to go outside the house and crawl through the snow to the outside toilet without legs and when I was two, my Dad made my first prosthesis.”

“The prosthetics I had made when I first came (to Australia), were fantastic and set the standard of prosthesis I’d use over the next 29 years. These enabled me to take my family on a six-month camping trip around Australia. We went off road most of the time and explored many beautiful ‘wows' that this country has on offer.”

“During my younger years, I travelled life’s road alone. Today, I seldom travel alone. Thanks to the community and society for becoming so accepting, supportive and aware – you are awesome!”

Kelvin received assistance from Carers Queensland’s NDIS Local Area Coordination Partner in the Community Program to develop and implement his NDIS funding, and his needs at the moment are simple.

“The only disability aid I have is the prosthetic legs which I wear, sometimes. Otherwise, around the farm I just bum around. When I first met with Cass, my Local Area Coordinator, she asked what I would like. I said ‘I’ve got an orchard and I go through a lot of holes in my jeans.'”

“So can I get someone to sew some patches on my jeans? And I have an old, 20-year-old office chair in the kitchen that I use for sitting on and preparing meals and the seat’s kind of going on it. Do you think the NDIS could buy me a new one?'.”

Kelvin recognises that as a thalidomide survivor, his needs may change in the future and the NDIS provides him with the ability to respond to those changing needs with the right level of support.

“Nobody really knows what lies ahead, what's on their road. I think it's absolutely fantastic to have an insurance scheme like this, which allows people to maintain the current activities and interests they have and to keep fostering those interests. So, yeah, I think it is brilliant.”

“In 2016 I was in Canada, and British Columbia Hockey gave me a sled to use. I took it up to a frozen lake in far northern Canada and gave it a try with my family up there.”

“My wife went on it and before that, my cousins went on it and our friends went on it. I could see that this was an opportunity for Australia to have this team sport. When mums and dads, families, people with or without disability can play at the same level – it's a very attractive and inclusive sport.”

“I thought, this could really get legs in Australia. It's something like the Jamaican bob sled team you know. Why don't I try it in the tropics?”

“Para ice hockey is massive in parts of Europe and in north America. So in Australia we are 10 or more years behind, but we are flat out like a lizard drinking working to catching up.”

Kelvin is working with the local Men’s Shed and bike shop to develop a ‘top notch’ wheeled version of the sled, which could be used off the ice, in schools, and in regional and remote areas.

To find out more about the NDIS contact Carers Queensland NDIS Local Area Coordination Partner in the Community Program on 1300 999 636.