Sarah on being her own boss 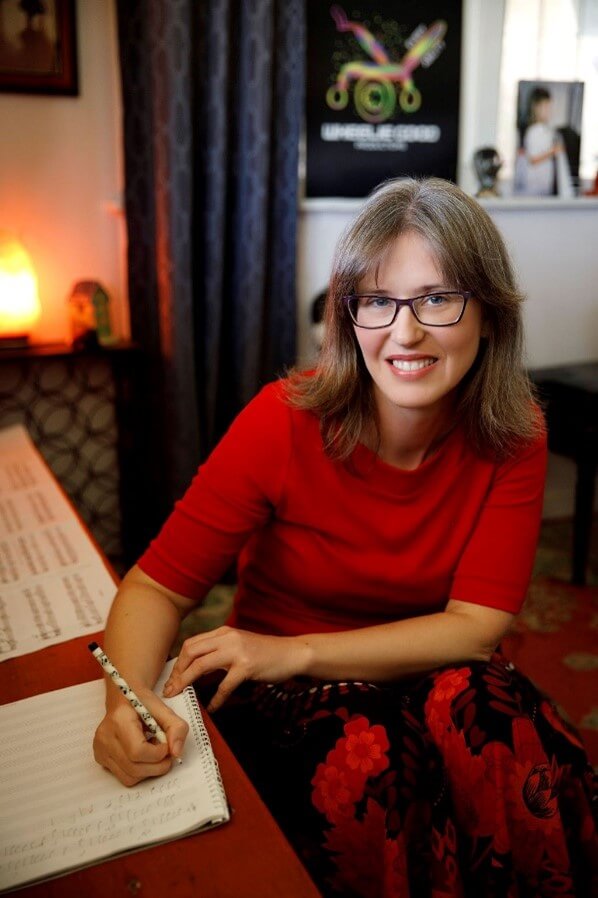 Sarah Styles is a musician, performer and business owner from Ipswich who is cutting through stereotypes in the arts world, one performance at a time.

Since accessing the National Disability Insurance Scheme (NDIS), Sarah who is hard of hearing, has used her funding to learn Auslan and connect with the Deaf community.

“Since joining the Deaf community I’ve had all of these things happen. I think, ‘Oh my gosh, we need to now have Deaf theatre in Queensland again’.

“But I want to make it a new thing where we can have hearing and Deaf together. I also want to write musicals for Deaf theatre, because we do enjoy music, just in a different way.

Sara founded Wheelie Good Productions and business is going from strength to strength after a year spent being curious and taking opportunities, including Carers Queensland’s Be Your Own Boss Marketplace in Ipswich last year.

“It was a good starting point. I got some stickers made up with the logo for that event, and I had business cards, that came in handy when we were invited to have a booth at the Disability Expo, in exchange for cosplaying around the floor.

“But, I think something that is really amazing is an Indigenous lady that I met many years ago in the community – she was a poet, singer songwriter, and she just gave her poetry books out, she didn’t even charge for them – she gave me permission to turn them into songs if I wanted to.

“I did turn one of them into a beautiful song which we are using in our musical that we are premiering next year.

“I had to get legal permission and by this stage she was in a nursing home and not doing so well. I went and visited her and I sang the song for her.

“I spoke to her son and I invited him and his sister to Be Your Own Boss last year, because we did perform that song. So it was just wonderful.”

Sarah has worked hard to build her production company and will return to the 2021 Be Your Own Boss Marketplace in Ipswich on 3 December, where she will be performing.

“We do backing tracks that do not cause issues for hard of hearing people, but they still sound great to everyone else.

“This year my singer/business partner/sound engineer – he wears many hats –will not be there, so I’m going solo. I will be singing all the songs solo, but I’ll also have a stall this year.

“I’ll have some merchandise and I’ll have some products that I’ve made, because I also have a side business called ‘Cap Creatures’.

“People have loved my Cosplay – I went as Smaug a couple of years ago to a convention and I can’t wear a full headpiece, so I made Smaug’s head on a cap. That took a lot of work but everyone was like, ‘I want a cap!’ So, Cap Creatures was born.

Sarah’s production company, Wheelie Good Productions, has a big year ahead, working on a musical, a film and recently holding a Cosplay convention.

“It’s just completely exploded. Last year’s Be Your Own Boss event – none of that was in my sights yet. I was trying and had just started everything.

Sarah’s advice to other people looking start their own microbusiness, or with a new business, is to keep their eyes open for opportunities.

“Get onto websites, get on to organisations like Carers Queensland or the local council. There’s programs and things that people run.

“Ask people, connect with people in your community. If you’re curious it opens you up, and the world up, in a way that you couldn’t imagine.”