Home/Posts/NDIS, News/Sean is living his dreams thanks to the NDIS

Sean is living his dreams thanks to the NDIS 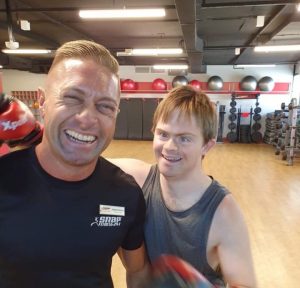 Sean Fisher is increasing his independence by moving out of home, successfully working two jobs and developing his health and fitness thanks to National Disability Insurance Scheme (NDIS) supports.

When the 25-year-old from Dutton Park first moved into his own unit, support workers helped him move out and develop his skills to successfully cook, shop and support himself.

Sean’s mum, Lisa Bridle, said he now lives with a roommate who also provides support and oversight to Sean on household routines and helping him to problem solve, such as when to throw out food and knowing when to change the bedsheets.

“It took about two months for him to be able to cook his own breakfast independently on a new stove, four to five months to be confident in taking the train and about nine months to feel completely okay about shaving himself.

“He is cooking mostly with support of a support worker and hosts friends regularly on a Monday. He is very proud of the progress he has made and the fact that like his other school friends, he is living independently.

“He is developing lots of nice local connections and becoming independent in planning shopping; each time he achieves a goal, we work on the next.

“The transition took a lot of focus and coordination but it has been wonderful to see how much he has grown in the last 12 months,” Lisa said.

Sean, who has Down syndrome and hearing loss, is also accessing NDIS supports to maintain his employment, working in an administration support role at Multicultural Australia and in the uniform room and set up team at Brisbane Convention & Exhibition Centre.

“At Multicultural Australia he does shredding, photocopying, laminating, printing and event set ups for workshops. This job is a great match for him as it is a big organisation and he likes the social side of things.

“At the Convention Centre on Tuesdays he works in the uniform room taking in and organising the uniforms and folding laundry, and Fridays he works in setting up for functions like getting table and chairs out; he likes being one of the guys on the set up team.”

With his Convention Centre job, Sean has a support person go to work with him to coach him through the work.

“He is independent in most tasks, but sometimes it is helpful keeping him on track and can make sure he knows the instructions.

“We self-manage supports and have invested in a good team of support workers who have a focus on coaching and mentoring – building skills and relationships in community.”

Fitness also plays an important part in Sean’s life, as he now accesses an exercise physiologist, personal trainer and a dietitian to become better educated on healthy food options.

“He is very physically active and loves his gym. Last year due to supports, Sean achieved his goal of losing 17 kilos.”

Sean was focused on a reward if he met his goal weight loss — originally set at eight kilograms — which was to visit the set locations of his favourite TV show, Home and Away.

“In early February, Sean and his support worker, Billy, set off for three nights in Sydney which included catch ups with friends, sightseeing including a harbour cruise and the Home and Away visit. They were lucky enough to see filming and also visited sites such as the Bait Shop, the Diner, the Lighthouse, the Pier and much more.”

Sean received assistance to apply for and implement his NDIS funding from Carers Queensland’s NDIS Local Area Coordination Partner in the Community Program for the Brisbane region.

Lisa said they have only had positive experiences with Carers Queensland and the NDIS.

“Our Local Area Coordinator, Lauren, has been easy to contact, though we haven’t needed a lot of support. The main quality that I have appreciated has been a willingness to listen and really understand our goals, sharing knowledge of the NDIS system and making the decision making and timelines as transparent as possible, and upholding Sean’s choices and respecting his goals by demonstrating flexibility.”