Stephen is gaining his independence with the NDIS 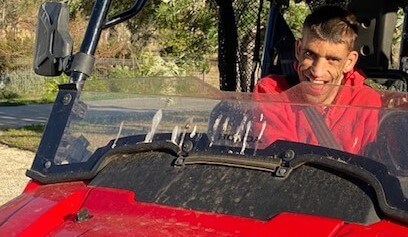 Stephen Davies is feeling more independent and settled thanks to the support from the National Disability Insurance Scheme (NDIS).

Stephen has recently celebrated his 30th birthday, lives on a property near Warwick with his parents and has a significant physical and intellectual disability requiring full time care.

“The NDIS has been absolutely life changing for the three of us, ” Stephen’s father Greg said.

“With the support from the NDIS, with the regular going to out of home care and with regular overnight stays, he (Stephen) has become much more independent and more trusting. He knows the carers and the other clients, he is much more settled and is much happier, it has made a big difference, ” Stephen’s mother Heather said.

Stephen’s parents recently were able to go away for a holiday for the first time in years knowing that Stephen was more settled and familiar with his environment.

Heather said, “Prior to NDIS we didn’t get the funding to get the regular out of home care, he was much more dependent on us and he was quite reluctant to be away from us for any length of time. Last year we were happy enough to leave him for a couple of weeks and we went on a holiday with some friends and he was fine. He has become more trusting of other people and different environments.”

The Davies family live on a property and Stephen loves to ride around with his mother in their Honda tractor so that he can get out onto the land and experience the outdoors.

“Stephen loves cows, we have about 70 animals at present. Heather runs a small stud and when we go down to the cattle yards Stephen will watch the cows for hours and we will feed them near him,” Greg said.

Heather also added “We like being in the country and Stephen loves the cows, he is my secret weapon in keeping them nice and quiet.”

The Davies family received assistance to apply for and implement Stephen’s NDIS funding from Carers Queensland’s NDIS Local Area Coordination Partner in the Community Program for the Toowoomba region.

We understand and value our local community.

Stay up-to-date with the latest news, events, and information.