Home/Posts/NDIS, Stories/Swimming champion Jack is living independently thanks to the NDIS

Swimming champion Jack is living independently thanks to the NDIS 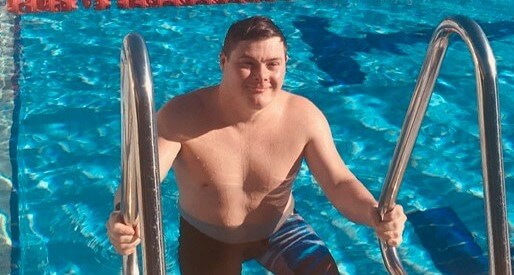 Jack Dixon feels as much at home in the water swimming for Australia as he does living independently for the first time, thanks to National Disability Insurance Scheme (NDIS) supports.

The 28-year-old, from Coorparoo, moved into his own unit in March, and is utilising three support workers who assist him to be self-sufficient and live his best life.

Jack’s mum, Helen, said Jack accessed an occupational therapist for advice about ways to make his unit work for him before moving in on his own, with his support workers helping him stick to his routine at home and after swim training.

“Jack’s support workers help him plan his meals, shop and they cook together. He also gets picked up after swim training, and two nights a week the support worker stays, and they can then share the meal they have prepared earlier,” she said.

“Now he feels safe in his unit, but we are very conscious of him not feeling alone. He really enjoys his support workers and calls them his friends.”

Jack, who has Down syndrome, has represented Queensland and Australia in swimming for most of his life, making his first state team in primary school.

While swimming events have been cancelled due to COVID-19, Jack maintains his fitness, mental wellbeing, social interactions and swimming goals training with the Brisbane Jets five afternoons a week and with the Redlands Special Olympics squad Saturday mornings.

“He is in the pool for two hours training with the squad, and has been doing this for years, plus two specialised exercise classes to help with his health and fitness.”

Jack’s new home is not only close to where he attends swim training, but it’s also within walking distance to where he works in the kitchen at McDonald’s.

“Jack started at McDonald’s doing work experience while still at school; this is his 11th year there now, and he loves it.

“Four-days-a-week Jack walks the six minutes to his job. Jack is also enjoying being able to walk home from work.”

Helen said it was important for Jack to be able to walk to work and swim training and to be close enough to some shops and food venues, so he could access them himself when needed.

“From the very beginning we knew we had done the right thing. He is well known in the Coorparoo area and people started to recognise him. Being a part of his community is important,” she said.

Jack received assistance to apply for and implement his NDIS funding from Carers Queensland’s NDIS Local Area Coordination Partner in the Community Program for the Brisbane region.

Helen said the NDIS continues to make a huge impact on Jack’s life.

“The NDIS is giving him the independence he craves and his family the chance to see that with the right supports around him, he can continue to live independently.

“Without the NDIS funding to pay for the support workers, this would be impossible to do. Jack is very proud of his place and how good he is becoming at living away from home.”