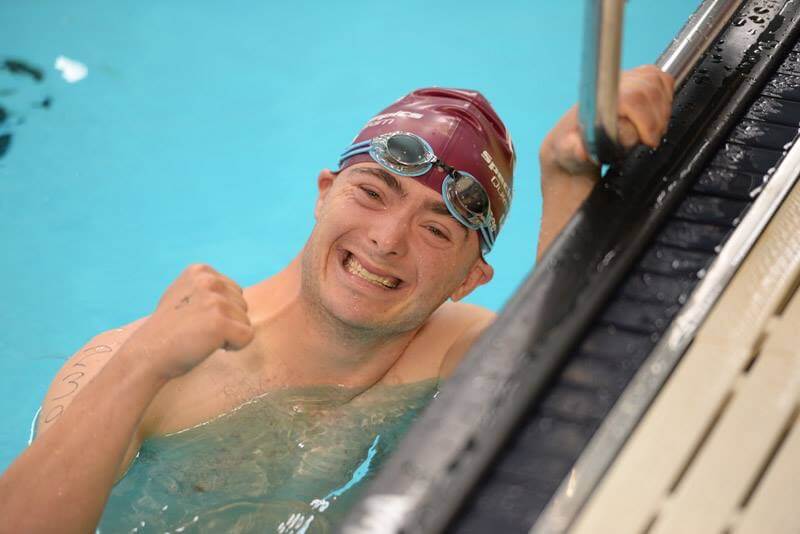 Tim’s mum, Jenny, said he is currently negotiating with Tennis Australia to attain coaching qualifications to help train people with a disability and children.

“Having this goal is helping him for his future, so he has something to keep him involved in supporting tennis as he gets older as he doesn’t know how long he can continue playing for,” she said.

Tim first picked up the sport 13 years ago, and it became a passion as he started developing friendships along the way.

Since then, Tim has competed in the Special Olympics, Australian and world tennis championships and is currently the world number one in Intellectual Impairment Division 2.

Tim continues to play as part of Tennis Australia’s elite training program, in private lessons and fixtures, utilising support workers to get there.

“It gives Tim the independence and we know he is okay and supported,” she said.

Tim is also an avid swimmer – winning gold at the 2019 World Games in the 4 X 100m freestyle relay – with support workers also helping him to attend swim squad training.

Tim also uses support workers to help him get ready and go to work four days a week as a groundsman at Arethusa College.

“Tim loves working there, where he is valued as a person and is accepted as one of the staff,” she said.

Tim received assistance to apply for and implement his NDIS funding from Carers Queensland’s NDIS Local Area Coordination Partner in the Community Program for the Brisbane region.

Jenny said she appreciates how the NDIS is helping Tim to develop his independence.

“He is growing so much since accessing the NDIS.”