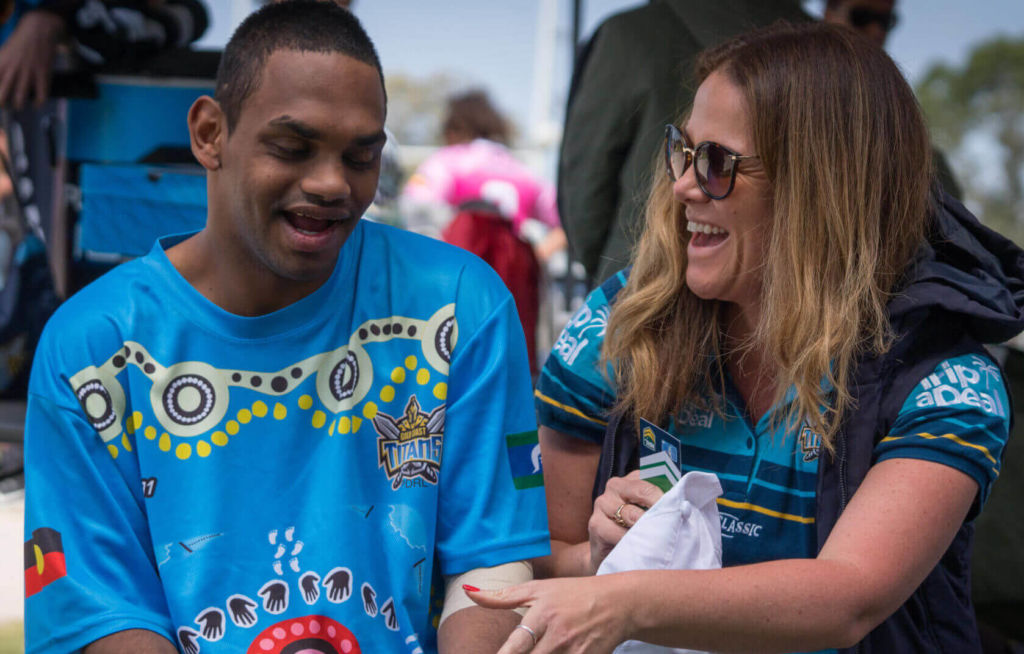 The Gold Coast Titans are leading the way in social inclusion in Rugby League and their achievements have everything to do with culture, leadership and innovative thinking.

We caught up with Renee Cohen, General Manager of Community and Game Development who leads a small team that has been instrumental in establishing and building the Titan’s Physical Disability and Intellectual Disability Teams to find out more about how the Titans developed their program.

Q: How did it get started?

Preston Campbell was a foundation player and he’s a figurehead of the Aboriginal and Torres Strait Islander Community and also nationwide he is well-respected and renowned for the work he does in the community.

Part of what he did is create this culture amongst the rest of the players, working out ways they can give back. About seven years ago, a player, Luke Douglas, came to me and his Mum had recently passed away. She had worked in a support unit for many years and he really wanted to do more in the disability space to honour her.

It’s funny how fate happens, the same day Cathy Ward from Down Syndrome Association of Queensland (as they were called then) got in touch, looking to engage with the club in some way for their members.

We organised a meeting with Cathy and her amazing daughter, Sarah and came up with a Down Syndrome Run Out. It was the first time ever in any code that thirteen young adults and kids with Down syndrome would run out with the Gold Coast Titans and the Brisbane Broncos.

The club was at this stage where we could try new things, and everyone was always extremely supportive in the community space. For us, it was more about getting the other team involved because clubs never do joint promotions when they’re competing.

The Broncos were really keen to get on board, though. Then I had to get the broadcasters, and then the NRL to agree, because normally you’re just allowed to have one kid to run out with the team.

It was a Friday night game and that meant all of these families were sitting down to watch the Titans play the Broncos in this grudge match. But before that grudge match, 26 beautiful faces with the biggest smiles ran out with the players. The players were so caring and made sure they got to where they needed to get. It reached 36 countries and had over 1.2 million views.

It was a very, very beautiful moment and that’s probably what made the whole club realise what a difference we can make.

Q: The Titan’s social inclusion program is now even bigger and the Physical Disability and Intellectual Disability Rugby League Program has led to finding employment for some of the team. Tell us more about that.

Ethan Sloane is our first ever employee with disability, who was employed with the Titans in 2018.

Ethan had been heavily involved in our programs since the beginning and his Mum spoke to me about her concerns about what he was going to do when he finished school. I gently floated an idea to our Chairman, Dennis Watt, who straight away said ‘Well, we’re going to give him a job.’

Dennis could see his love and passion for the club, and also how much it meant to him to be involved in something.

So from there a lot of our stakeholders and sponsors and people involved with the club saw what Ethan was doing and what he was bringing to the organisation and went ‘Oh maybe we should look at employing somebody with a disability?’

So, without meaning to, we sort of started providing these employment pathways for our PDRL/IDRL players.

We’ve placed three of our PDRL/IDRL players either with sponsors or stakeholders and we’re about to place our fourth with a new sponsor, Neumann Steel, in the next couple of weeks.

I think that’s probably what we can do, we can show how valuable Ethan is to the business and how valuable he is culturally, in regards to our players and the rest of our staff. Just to see no matter what’s happened in his life, or what barriers he’s faced, he walks into work every day with a smile on his face and always working out how to make other people smile. And I think if more people thought like that, the world would be a better place.

Q: What can other organisations starting out on their social inclusion journey, learn from the Titans?

I suppose the biggest way that we have been able to do all that we have been lucky enough to do, is with experience. I get all of our staff and our stakeholders to come to our NAIDOC day, or to attend the first game of our PDRL, just to experience it. As soon as they see it, and are a part of it, and understand how important it is – I think it’s that personal experience.

Q: Where to from here, and what’s it going to take to achieve it?

I would like to see a New South Wales and Queensland State of Origin for people with physical disability and intellectual disability.

It’s going to take funding to get there. We’ve got the framework and we know what we need to do it. It’s funding and as much support as we can get from local leagues and competition structure.

As much as I’d love this to be the largest portion of my job, unfortunately my job is very broad and I can’t devote the time that it deserves. Funding would mean that we would put on two social inclusion officers that would be out spreading the word about LeagueAbility and what people with disability can do, that they don’t have any limitations in Rugby League, they can play a version of the game.